Hey, 1. You can’t say I didn’t warn you people about the eye puns, and 2. Just be glad I haven’t decided to be extra rude, and change all of my “I”s into “Eye”s. I am that much of an ass, I am not even going to pretend otherwise. 3. Dammit, I should’ve used this eye pun for the post about my glasses!

I said before that I would eventually talk about the accident that left me functionally blind in one eye, and I even went over in briefly in another post, but those of you who want the full scoop, here you are.

“Stubborn as a mule” doesn’t even come CLOSE to covering it.

First off, let me explain: I’ve always had a stubborn streak – and, perhaps, even more importantly a contrary one. Tell me to go left, I’ll go right. Tell me to stop, and I’m gonna run right up and over you. It’s a running joke that I am so contrary, I couldn’t even be born on the day the doctor said I would be. I ended up being born two weeks late. Contrary. And it was the contrariness that ultimately caused me to be in the wrong place at the wrong time.

I was sixteen months old when the accident happened. My sister was fourteen at the time, and my brother was eleven. My father was at work, and my mother had been sick all day, so mom put me to bed, and then went to lay down, herself. My siblings were in the kitchen unloading the dishwasher.

Now, here’s where the contrariness comes into play. My mother put me in my crib, and told me to stay there. Three guesses what I did not do. (I’ll give you a hint: it starts with “stay” and ends with “there.”)

The minute they left the room, I was up and running. Climbed out of the crib, and ran right out of my bedroom, into the kitchen. My brother had just taken a glass mug out of the dishwasher, and seeing that a few drops of water remained inside, he did what any 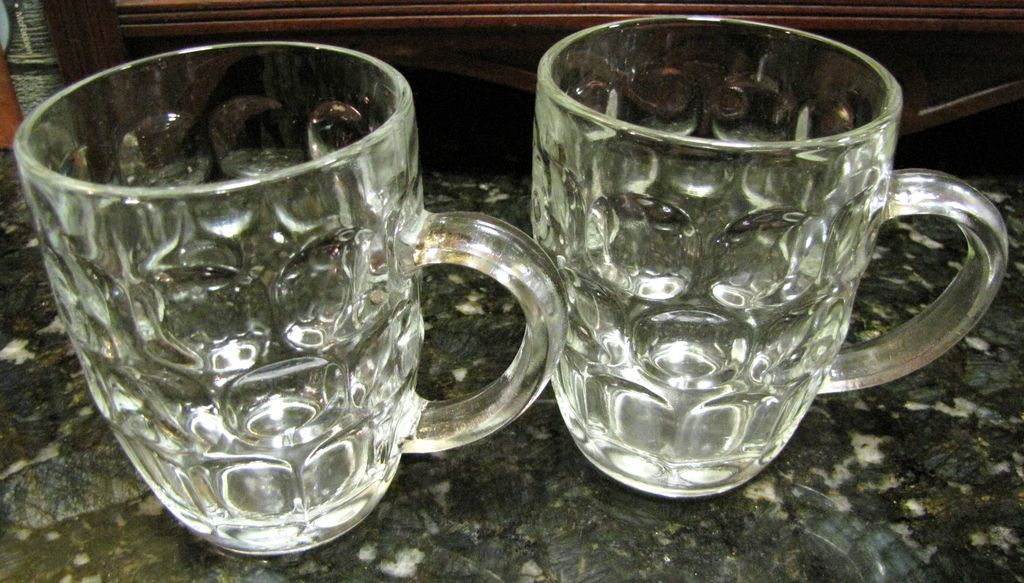 The cups were like these, but instead of alcohol, we used them for rootbeer floats.

one of us has probably done in our life times, and tried to shake the water out. He was holding it by the handle, he didn’t swing it wildly, he didn’t smash it against anything, he just gave it one good shake. The cup part of it detached from the handle and shattered…just as I came running around the corner. A piece of the glass cut through the eyelid of my right eye, and went into the eye itself.

My mom was a huge fan of the old show, Rescue 9-1-1. If it was on, the television was on, and the family was watching it. I’m not a fan of television, in general, but I can’t complain too much about mom’s obsession with that show. The last episode the family had watched happened to feature an eye injury, and thanks to this, my sister knew to grab a cup and place it over my eye, while someone else called for an ambulance.

Obviously, I was too young to remember all of this, and I’ve heard conflicting reports. One person told me I was flown from one hospital to another, and another person said that they drove me. From what my sister says, the paramedics who arrived on the scene wasn’t going to take me to the hospital, but one of them changed their mind, and I was originally taken to Franklin Square Hospital. I was then taken to John Hopkins Hospital (not sure whether it was flown or driven), where the doctors worked to save my eye.

When all was said and done, I had stitches on my eyelid and the eye itself. It’s been over thirty years, so my family doesn’t remember how many, but they believe it was at least seven or eight (maybe up to seventeen, total), and I wore an eyepatch for a while. Later, I visited the same doctor who treated me after the initial accident, and I found out that the reason I can’t really see anything on my right side, is because of a “trauma cataract.”

A cataract, for those of you who don’t know, is basically a cloud on the lens of your eye.

Retina scans of my left eye (undamaged) and right eye (with trauma cataract).

You can see it in the image above. The greenish mass that covers the right side of the lens is the cataract. I also have scar tissue, which complicates things a lot. I’ve been told that, even with cataract surgery, I  wouldn’t be able to regain complete vision in that eye, and I am okay with that. I’ve lived with my vision the way it is now for as long as I can remember. Honestly, if I had the surgery done, I think I would be worse off because the constant movement where none had been seen before would just drive my brain up the wall. Besides, the glasses I wear now bring what little vision I have in  that eye, from 20/80 to 20/30, I believe the doctor said, and that’s more than I’ve ever had. I put on these glasses, and I can actually read the clock from across the room with that eye alone. I’ve never been able to do that before. The only thing these glasses haven’t improved is my peripheral vision. Even if I look completely to my right side, I can’t see the edge part of my glasses. Meanwhile, on my left side, I can be staring straight ahead, and see the full rim and the left arm/leg of the frames. 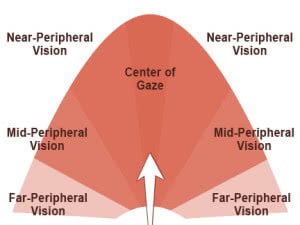 On the right side, everything past the Center of Gaze is pretty much gone. At  best, I can see to just before the “N” in “Near-Peripheral” is at. At best.

Another side effect of the accident is a strong light sensitivity. My right pupil is permanently dilated. Have you ever had your eyes dilated? If you’re over 20, chances are, you have (or at least, you should have – eye health is important, folks!). Now, try imagining walking around like that all the time. That’s how it is for my right eye. Bright flashes of light on that side are physically painful. They’re also mentally painful.

It’s not all bad though, I have excellent night vision. Unless the room I’m in is pitch black, I can easily read a book in a dark room, while everyone else is stuck stumbling around, trying not to trip over their own feet. Also, because I’m so used to the extra flood of light coming in on that side, if there’s a bright light on my left side, I can pretty much just brush right through it. It’s still annoying, but I can manage. On the downside, does the sun really have to be so flippin’ bright? (Kidding, guys, kidding. I science, I promise.)

What’s interesting about this whole thing, by the way, is how the emotional/mental impact caused the accident overshadows my life far more than the loss of vision. Besides my own slight PTSD over the whole ordeal, my family also has suffered. I don’t speak to my brother much, but from what I’ve been told, he still wrestles with feeling guilty over the accident, even though he did nothing wrong. My sister was the one holding me during the call to 9-1-1 and keeping the cup over my eye, so she had my bloody hand prints all over her. She was also the one who cleaned up all of my blood off the floor and calmed my brother down, who was, of course, freaking out. I tried asking her about it, but she can’t put the feelings into words – and considering she’s a writer as well, that’s saying something. I do know she also has a strong reaction to the sound of breaking glass, and she gets jumpy when children are near things that are out of a person’s direct control (people throwing balls, slamming stuff around, etc.).

My mother…her version of the story completely contradicts what my sister and I both were told by our father, so whether she has it right, or due to the trauma of the accident on top of the very recent (at the time) death of my baby sister, she has gotten it all mixed up, I have no idea. Either way, the whole accident had a massive impact on my family that still affects them today.