Reblog: Review of “Blood-Stained Letters Found in a Roadside Shrine on the Outskirts of Kyoto”

Another review from SFF Reviews.

via REVIEW: “Blood-Stained Letters Found in a Roadside Shrine on the Outskirts of of Kyoto” by Stewart C. Baker

I cannot express just how much I love this story. It has magic, and children, and growing up, and fireflies, and magic. Sarah Krenicki takes us for a short trip into a world where children gain magic on their seventh birthday, and lose it the day after they turn eight. It’s a rite of passage all kids go through to become “big kids.”

All kids except for little Katy. She turns seven, gets her magic…and never loses it, even when she turns eight, then ten and twelve. In this, Katy is almost a Peter Pan figure, with her older sister (or so I assume) playing the part of Hook. Or perhaps it would be better to say that Katy is Peter, her magic is Wendy, and her sister is the jealous…

Review of “One Last Time”

Lorena Torres Loaiza will break your heart with this story from Syntax and Salt, but you’ll love it, anyway.

Centered around a man who just lost his wife, “One Last Time” is…well, okay, it’s an old concept. Wife dies. Husband doesn’t want to let her go, so he uses a time machine to go back and – no, he doesn’t prevent her death, it’s not that old concept. No, he just goes back to when he first met her. He sits right next to his old teenage self, watches her come sauntering up. Sees himself see her for the first time.

And sees himself. Over and over again.

Confused? Go read it. Trust me, you’ll see what I mean, and I really don’t think you’ll regret it. My only complaint is that it ended…and that it set off the nerd side of me that adores The Chaos Theory. Replacing that many people has to have some sort of effect on the world…

Today’s review will be of Christina Dalcher’s “Disprosopus.”

This short story from Syntax and Salt was a bit more to my liking than The Alabaster Man was, but not by much. It was interesting, I will give it that, and the writing wasn’t bad. I kinda expected what I think was supposed to be the “twist” (I imagine it helped that I looked up the meaning of the title first) and I have to give all kinds of credit to the father in the story for coming up with the creative revenge of his daughter’s death, but I have so many questions that need to be answered.

Naflah says her job is to distract the sheikh while Aneesa does her work, and it is implied that Aneesa bites off…um…*cough* something. But how does a man not notice that? Even with a good distraction, they’re gonna feel it. Unless she had poison in her teeth, and all she had to do was get a good nip in, but that isn’t what is implied at all. Also, how does she hold him down so he doesn’t struggle against the bite? I mean, again, there is only so much distraction can do.

If you can suspend your belief past those little problems, however, it’s not a bad little story. I might be willing to give the author another look, at least.

So a fellow blogger and I were talking about stories that had a lasting impression on us (in one way or another. Her story, about ‘The Red Spot’ can be found here.

This is my contribution: 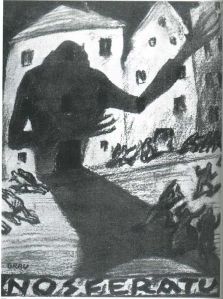 One story that left a lasting mark on me, was a story I read when I was around six or seven. I don’t remember the name of the book, or where I got it from, but it was a collection of scary stories (what is it with kids and scary tales? Seriously?!) including legends of vampires and werewolves. Some of them were just plain “meh.” Urban legends about, how sleeping in the light of the full moon for three days in a row would cause you to turn into a werewolf, using grains of rice to keep a vampire busy until dawn, etc. But one of the stories…oh, that story got me good. In a really weird way. Here is a short version of the tale from Wikipedia:

“There once dwelt in a cavern in this country a vampire, called Dakhanavar, who could not endure anyone to penetrate into these mountains or count their valleys. Everyone who attempted this had in the night his blood sucked by the monster, from the soles of his feet, until he died. The vampire was however at last outwitted by two cunning fellows: they began to count the valleys and when night came on they lay down to sleep, taking care to place themselves with the feet of the one under the head of the other. In the night the monster came, felt as usual and found a head: then he felt at the other end, and found a head there also. “Well,” he cried. “I have gone through the whole 366 Valleys of these mountains, and have sucked the blood of people without end, but never yet did I find any one with two heads and no feet!” So saying he ran away and was never more seen in that country; but ever after the people have known that the mountain has 366 Valleys.”

It’s simple and not really scary, but ever since then, I cannot sleep unless my feet are covered. I also will never forget that the mountains have 366 valleys. Too bad I can never remember the name of the mountain range with so many valleys…

Adventures at work. I don't know if it was a customer or one of my coworkers, but we've had this #kindnessrock hanging out by the register since I started working there. No one has been able to think of a place to put it yet, so I volunteered. There's not much between where I live and where I work, but I'm sure I can figure something out. At the very least, it'll be something fun to do, and will (hopefully) spread some joy at the same time.
Loading Comments...
Comment
×
%d bloggers like this: